It has been 2 weeks now since I raced in the Cycling Road Race in the Olympic Games and it turned out to be everything I imagined it would be.  Being an athlete participating in the Games is truly the experience of a lifetime. 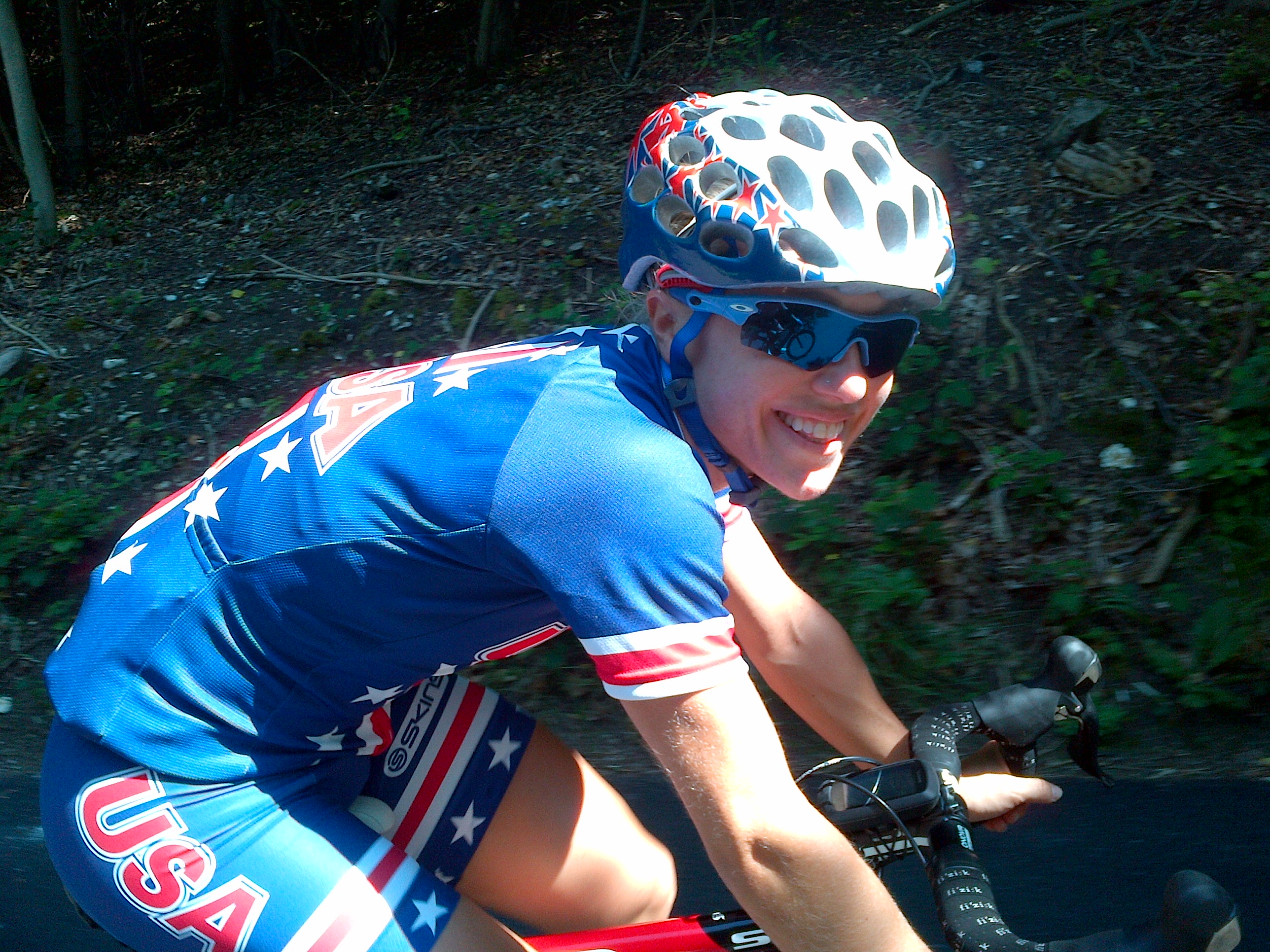 Looking back on my race, I can be very satisfied that I went to the Olympic Games 100 percent prepared to race and perform at the best of my ability.  I feel that I was ready for the challenge physically and mentally and that I was truly able to live in the moment during my time in London. Unfortunately, destiny played its hand and a stroke of bad luck robbed me of a very good chance at a medal. 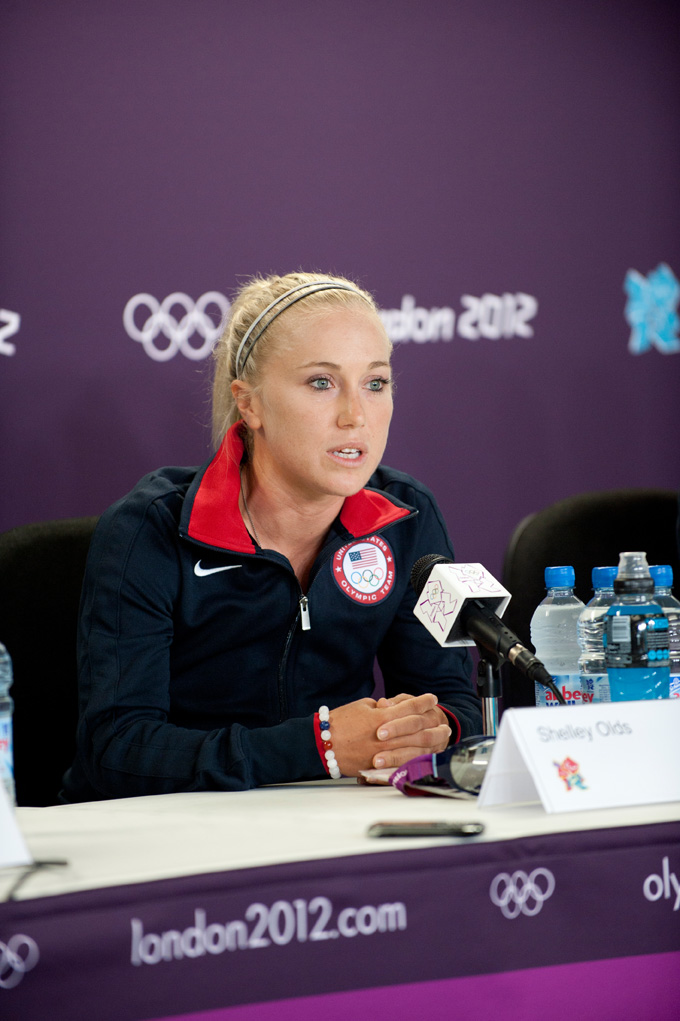 The day started with sunshine, but just before the race, the rain started coming down.  I took the start line with the 65 other riders from over 20 different countries as we heard the thunder in the distance and the rain was starting to get worse.   The whistle blew and the tension was already extremely high.  For the first 50 km of the race, crowds lined the sides of the roads as we rode out of London city center.   The cheering was incredible.  I couldn’t hear anything but the sounds of the crowds yelling and clapping, and it was like nothing I had ever experienced before.  It was amazing to have so many people supporting us for so much of our race, especially when ours is a sport that often has so few spectators.  I tried my best to appreciate the cheers and soak it all in, but the noise made it difficult to focus and find my rhythm.  And the rain just kept getting harder.  The roads became more and more slippery and with little visibility for us all, the peloton was a dangerous place to be.  I was waiting for the race to really get going so it would be safer.  It took a lot of focus to tune out the noise and the conditions.  But once I did, I was locked in “the zone.”

The race started to pick up after about 50km when we approached a small climb with a difficult descent.  There was an attack going into the climb and USA had a rider in it, but it looked dangerous and I knew that any small selections on a course like this with the rain and the size of the peloton, would be difficult to control, so I decided to go across to the group.  The peloton came back together at the top but before the descent there was another attack and this time I was on it straight away.  At the bottom of the descent we were already a small group of maybe 10 riders and Marianne Vos of the Netherlands (eventual winner), attacked.  I was on her wheel and we started to ride a little before a group of about 20 came across to us. Unfortunately, no one wanted to ride and the whole group came back together again.   The attacks continued as we made our way to the main climb on Box Hill.

Going into the climb the pace of the peloton increased as everyone fought for position at the front of the group.  I found a good wheel and started the climb very close to the front.  The pace was hard but steady the first time up the climb and the attacks didn’t start until the top where the circuit was like a plateau.  But the attacks were strong and fast and there was again a selection going over the top.  This time I was a little further back than I wanted to be and I was following wheels behind to reconnect to the front group.  Eventually the group came back together as we made our way back around the circuit to the main climb.  This time I started in great position.  I was 3rd wheel behind the Germans and when the Dutch team attacked, I was able to just follow as the German girls closed the gap.  Then came some more attacks by the British team and going over the top was a very aggressive attack by Marianne Vos again.  This time I was on her wheel from the moment she attacked and I knew this would be the decisive move.  As we crested the top of a short but very steep little climb, I looked back only to find Lizzie Armistead, a British rider, with us.  We started to ride immediately, with Vos doing most of the initial work to establish the breakaway.  After a few minutes we had one more rider with us, the Russian, Olga Zabelinskya.  The rain started to come down even harder as our gap began to increase.  We started to ride together and the gap was holding at 20 seconds.  I was sure this was the move that would make it to the finish line together and that I would have an excellent chance at a medal.

All of the pain started to go away as I realized how close I was to my dream of medaling at the Olympic Games.  I started to find my rhythm and changed my focus to how I could win in the sprint.  However, all of that focus and excitement shifted again when I felt my front wheel start to go soft.  I looked down in front of my bike and saw the flat tire and my heart sank.  I only had one option and that was to stop and wait for the motorbike behind me to give me a new wheel.  The change came but it was like everything was in slow motion.  The rain was pouring down now and I knew there was only 30 seconds or less between the break and the chasing peloton.  I knew the change had to be fast if I was even going to get back into the field.  But it wasn’t.  The change was probably the slowest change I have ever had. It took almost a minute for the support to give me a new wheel.  After the group passed I finally got a push back onto the road and began chasing the back of the peloton.  My team dropped back to help me re-connect with the bunch and I was there again, but devastated.

I asked my team to start helping with the chase along with the German and Italian teams who also missed the break.  But it was too late and the break was gone.  The horsepower left in the bunch was not enough to match that of the riders in front and we were unable to catch them.  I tried desperately to keep fighting and stay near the front, in case the break came back or just to contest the sprint for 4th place.  But I was dying inside, both mentally and physically.  I could not believe what happened.  I kept position until the end near the front, but having worked in the break and then chasing to catch back onto the group, I had already burned too many matches. I began my sprint alone, on the opposite side of the road from the sprinters, and finished behind them all in 7th.

When the race finished, I sat down in the rain on the side of the road.  My teammate, Evelyn Stevens, came and gave me a hug and I hung my head on her shoulder and cried.  Together we sat in the rain in our dirty, wet cycling clothes as I continued to cry.  It was so hard to pass all the media who were crowded around the medalists.  I wiped the tears from my eyes and held my head high, congratulated the winners, and walked on.  At the end of the line, a reporter from cyclingnews who I know and respect stopped me and asked for some words.  With tears in my eyes, I gave her my story.  You can find it here.

I have spent the last 2 weeks wondering why this happened and trying to come to terms with how close I was to success, but there is no changing what happened and I have to move on.  I gave it everything I had, I executed my plan, and I came prepared to compete with the best.  What happened to me was completely out of my control.   This is the nature of our sport.

Watching all of the Olympic sports on television now in my home in Spain, I am reminded of how bittersweet sport can be.  Unlike so many other sports, cycling involves the unavoidable variables that can rob of us glory.  It doesn’t matter how ready, strong, or smart we are that day.  We can always crash, have mechanical problems with the bike, and flat tires.  Bad weather can cause more crashes, more problems with the bikes, and a lot more flat tires.  A crash or mechanical can prevent the best riders from even contesting the win, when maybe they have raced perfectly for 3-4 hours. You can be the strongest for the whole race and you may not be the winner.  Our hopes and dreams go into one race, and there is only one chance at a medal. You either get it or you don’t, then you must wait 4 more years for a shot at a medal.  And you hope that the next chance you have, the course is suited for you.  In swimming, the course never changes, the weather never affects your performance, and if you miss a shot at a medal, you may have 5-10 more chances at an Olympic medal.

Cycling is like this.  Opportunities don’t come often, so you need to take advantage of every chance that you get, because it may be a long time before all the pieces fall into place again.

Thanks for reading ~Shelley